Methyl internal rotations and 14N quadrupole coupling in the microwave spectra of 2,4-dimethylthiazole and 4-methyl-5-vinylthiazole

The rotational spectrum of two thiazole derivatives, 2,4-dimethylthiazole (24DMTA) and 4-methyl-5-vinythiazole (MVT), were measured using a pulsed molecular jet Fourier transform microwave spectrometer operating in the frequency range from 2.0 to 26.5 GHz. In MVT, the internal rotation of one methyl internal rotor caused splittings of all rotational transitions into A-E doublets, while internal rotations of the two non-equivalent methyl groups in 24DMTA into quintets. In addition, the microwave spectrum includes quadrupole hyperfine splittings caused by the 14N nitrogen nucleus, making spectrum analysis more challenging. The programs XIAM and BELGI-Cs-hyperfine were used to deal with the relatively low methyl torsional barrier of 105.79(13) cm−1 found for MVT. The A and E torsional species were fitted separately to check the correctness of the assignment. For 24DMTA, the spectrum analysis was difficult due to the very low torsional barrier of 22 cm−1 of the methyl group adjacent to the sulfur atom. An intermediate torsional barrier of around 397 cm−1 was obtained for the methyl group adjacent to the nitrogen atom. The experimental results are compared with the predicted values obtained by quantum chemical calculations. 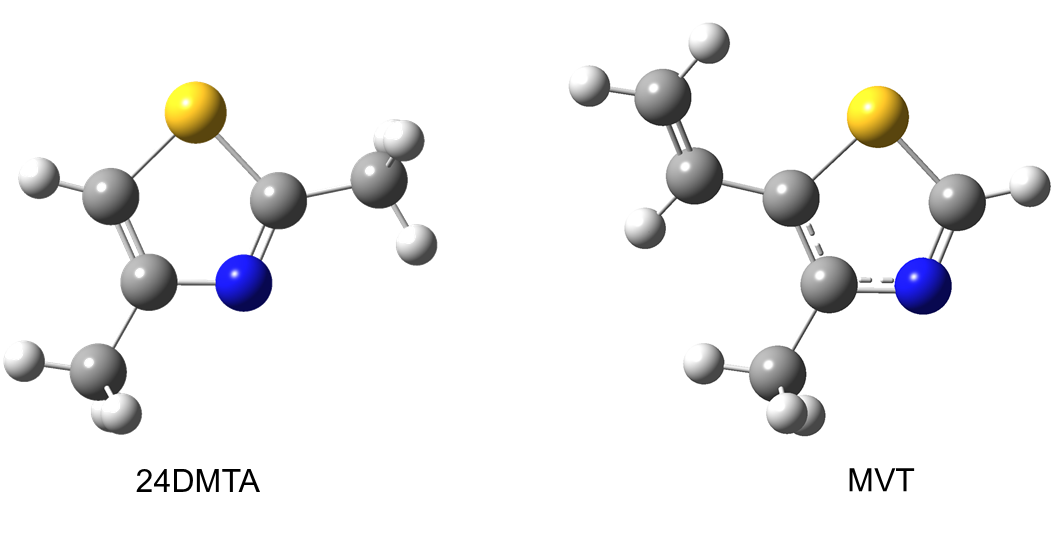