It is well known among spectroscopists that hydrogen has two modifications: para-H2 and ortho-H2. Pure para-H2 can be produced by leading “normal” H2, a 3:1 ortho:para mixture, over a catalyst at low temperature. It is perhaps less well known that para-ortho H2 conversion is also catalyzed by collisions with paramagnetic molecules, such as O2. 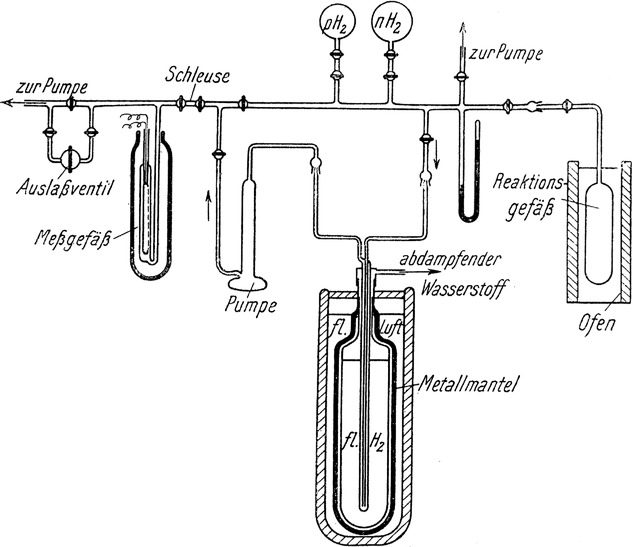 Almost ninety years ago Farkas and Sachsse [1] measured the rate coefficient of para-ortho H2 conversion in gas mixtures with O2, with the setup shown in the figure. In the same year, 1933, it was proposed by Wigner [2] that it is the magnetic dipole-dipole coupling between the electron spin of O2 and the spins of the two protons in H2 that is responsible for the conversion. In asymmetric collisions this coupling makes the two H-nuclei inequivalent and mixes the nuclear spin functions of para- and ortho-H2, as well as their rotational states with even and odd j values. Another mechanism, suggested to be much more effective, was proposed later: the exchange interaction with the open-shell O2 induces spin density into the electronic wavefunction of H2. In most collisions the spin density is different at the two H-nuclei, which makes them inequivalent by different hyperfine interactions through the Fermi contact term.
An important application of para-H2 is in NMR spectroscopy and its imaging variant, MRI. By adding para-H2 to the sample the sensitivity of NMR can be increased by four orders of magnitude by a phenomenon called para-hydrogen induced polarization (PHIP). Para-ortho H2 conversion by O2 in the gas phase was remeasured [3] in 2014 in view of this application. A detailed and quantitative understanding of the conversion process was still lacking, however.
We theoretically investigated [4] para-ortho H2 conversion by collisions with O2 in a first principles approach. Both mechanisms were taken into account and the corresponding coupling terms were quantitatively evaluated as functions of the geometry of the O2-H2 collision complex by means of ab initio electronic structure calculations. Then they were included in nearly exact quantum mechanical coupled-channels scattering calculations for the collisions between O2 and H2, which yielded the para-ortho H2 conversion cross sections and the rate coefficients for temperatures up to 400 K. The conversion rate and its temperature dependence are in good agreement with the values measured in H2-O2 gas mixtures. The calculations provide detailed insight into the conversion process.